Tuesday, September 4:  After lunch, I drive 14km east to Moni Preveli, a monastery that sits high above the Libyan Sea in peaceful isolation.  It seems that the first core of the Monastery was organized on the area of the Monastery of Saint John the Baptist during the II Byzantine period of Crete, around the 10th or the beginning of the 11th century, when many monasteries were established on the south coast of Crete.  The oldest date related to the monastery is 1594, and it is engraved on a bell of the monastery. The monastery was probably founded during the Venetian occupation by a feudal lord known as Prevelis. When in 1649 the Turks occupied Crete, they destroyed numerous church establishments, among them the monastery of Preveli.

on the drive from Plakias to Moni Preveli

the monastery, from the outside looking in…

After the battle of Crete in 1941, the Germans plundered the monastery after many Allied soldiers were sheltered here before being evacuated to Egypt. Even after some were evacuated, a large number of English, New Zealand and Australian soldiers remained on the island because they had no means of getting away. Although the occupying forces ordered very harsh reprisals against the local population if they provided shelter to these remaining Allied troops, the Monastery of Preveli and the neighbouring villages became for many of them a place of safe shelter and a point from which they could escape. The monks and the local people organized themselves into groups to guard the area, to care for and protect the Allied soldiers who were dispersed in various hideouts known only to the locals.

Eventually, German Officers came to the Monastery and put the monks through a terrible interrogation. The monks were arrested and sent to Firka prison, where they were charged with “illegal possession of guns and a radio, the provision of care to British fugitives and to Greeks, persecuted by the occupying forces”. After the powerful intervention by the Bishop of Kydonias and Apokoronou Agathangelos Xirouhakis with the German authorities, the monks were released in a short time and returned to their Monastery. They found it almost wholly devastated and so had to begin again on the work of reconstruction, strengthened by the sympathy and help of the local population and of other monasteries of Crete.

the monastery through the trees

Today, a number of people are here to visit the monastery, but sadly, it’s closed for several hours for an afternoon rest.  All we can do is stand outside the gates and take some pictures.   I’m not about to wait for 2 more hours for it to open, so I head off to explore other beaches on the south coast.

the cliff above Preveli Beach

First stop, Preveli Beach, a lovely stretch of sand below the monastery.  Also called Palm Beach (Paralia Finikodasous), it’s at the mouth of the Kourtaliotis Gorge.  I stand at the top of a cliff and admire the beach, but as I have another destination in mind, I choose not to walk down the steep path to the beach. 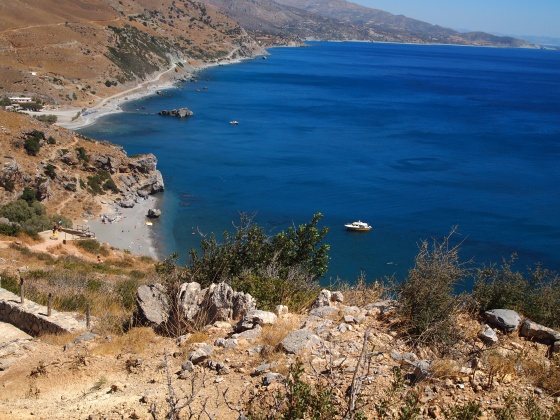 I want to go to Triopetra, which means “three rocks.”  Panos at Barbara Studios recommended it to me this morning, so I have decided I want to see it.  I drive inland to get to it, through the town of Spili, because I’ve been told by the locals that it’s a rather difficult road along the coast. 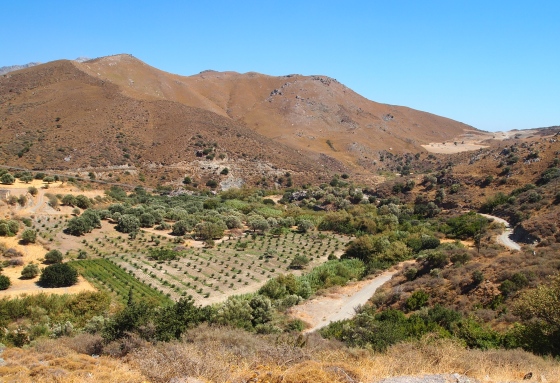 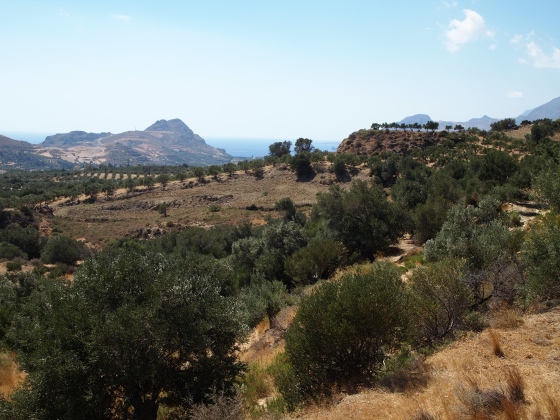 more views of a drive through southern Crete

At Triopetra, the cove stretches west to the three rocks rising from the sea.  From my viewpoint, I can only see two.  It’s quite secluded and apparently a destination for yoga-practitioners because of its peaceful setting.   A set of domatia and two tavernas sit above its quiet sandy beach.  Domatia in Greece are as cheap and as safe as hotels, and allow you to stay in a Greek home and absorb some local culture. 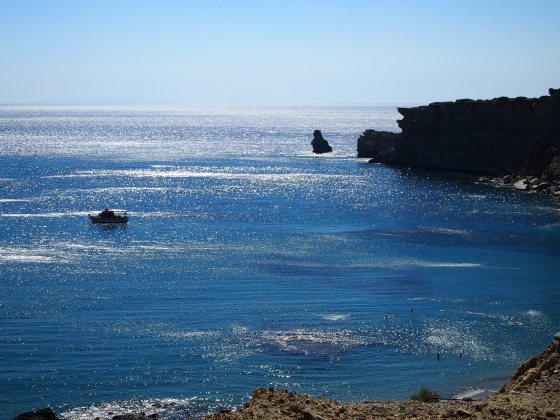 view of the Libyan Sea and the coast to the west

I pay for yet another lounge chair, and I sit and swim until I get nipped at by something in the water and then get out.  I love the sea here!  It’s so cool and delectable.  After enjoying this secluded spot for quite some time, I get in my car and head back to Rethymno.  this is my last night in Crete, and tomorrow I have to get up at the crack of dawn to take the ferry to Santorini.  I’m excited about Santorini, but I’m really not ready to leave Crete!  😦 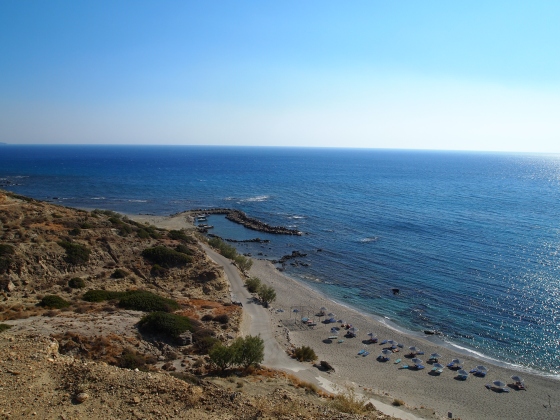 view to the east