Monday, September 3:  After walking along the Mediterranean, where I see a lone fisherman standing on a rock and an older lady swimming off another set of rocks, I climb the steep hill to Rethymno Fortress. 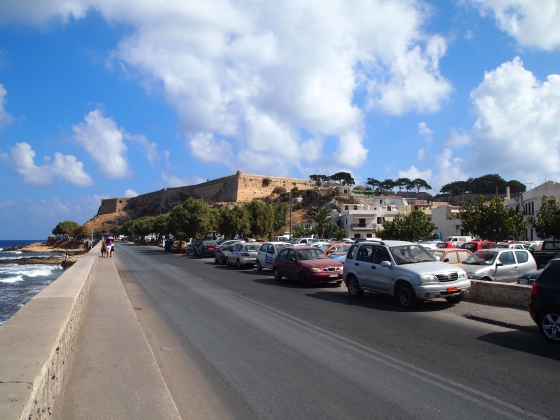 the Rethymno Fortress from the seaside road

The Fortezza is the 16th century Venetian fortress, almost in the center of the old town. The giant Fortezza is visible from every corner of the town and offers panoramic views of Rethymno and the coast to the west, according to Explore Crete.

Rethymno became a city because the Venetians, who were a marine power, created it as an intermediate station between Heraklion and Hania.  At that time, the city needed protection from the Turks, so they organized Crete’s military and built a fort. The foundation stone was laid on 8 April 1540 but the walls were only completed just before 1570.

the town of Rethymno from the Fortress

These walls were not strong enough to withstand an attack by the Pasha of Algiers in 1571, so the people of Rethymno and the Venetian Senate decided to build a fortress which could shelter all the houses in the town.  The hill of Paleokastro was chosen and work began on the Fortezza.

the walls of Rethymno Fortress

The Fortezza was built according to the bastion fortification system, with bastions joined by straight sections of thick curtain wall, inclined outwards to make enemy missiles bounce off without damaging the fortress. 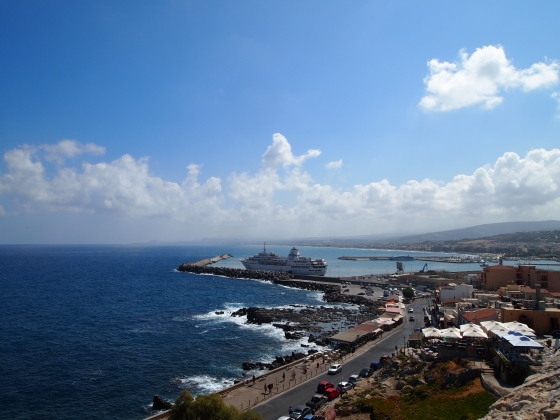 the view from the Fort to the port

The foundation stone of the Fortezza was laid in 1573.  Work on the walls and the public buildings within them was completed by 1580.  During the years it was being built, 107,142 Cretans took part in compulsory labour and 40,205 pack animals were requisitioned to work on the Fortezza.

As it turned out, the Fortezza of Rethymno was not used for the defense of the island but simply to cover the needs of the Venetian garrison and administration.  In case of danger – in other words the Turkish invasion – the inhabitants used it as a refuge.

Rethymno fell to the Ottoman Turks in 1646. The layout of the Fortezza does not appear to have changed significantly during the Turkish occupation, although there is insufficient information on the subject.

the bastion walls of the Fort

Fairly early on, the Turns converted the Venetian cathedral of San Niccol into the Mosque of Sultan Ibrahim Han. More houses were also built, mainly on the south and east sides of the fortress, for the Turkish garrison and administration. 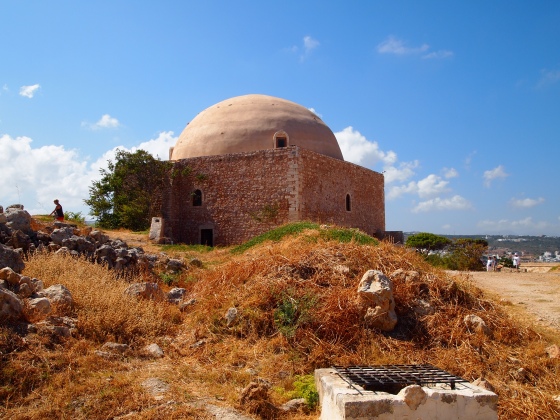 the Ottoman Mosque of the Sultan Ibrahim Han

an art exhibition inside the mosque

At the turn of the 20th century almost the whole of the interior of the Fortezza was full of residential buildings. Immediately after the Second World War, however, the inhabitants of the Fortezza began to move out to other parts of Rethymno.

looking over the walls to the sea and town below

more walls of the fort

I spend quite a long time walking around the grounds and the perimeter of the huge fort, admiring the amazing view of the Mediterranean, the port, the red-roofed houses of Rethymno, and the more modern town inland.  It’s quite hot up here and I eventually make my way back down from the fort and into the old town, where I stop for lunch at an outdoor cafe called Symposium, where I have a delicious omelet and a lemon Fanta.

After lunch, I head to my car back near the fort.  This morning Panos from Barbara Studios suggested I might want to explore the town of Hania this afternoon.  Apparently, it’s about a 45 minute drive west from Rethymno.  So off I go…

For more views of Rethymno Fort, check out the slideshow below.