Sunday, September 2:  I start this morning by repacking my newly arrived bag, trying to squeeze in all the extra stuff I bought.  I have to check out of the Acropolis View Hotel because I’m flying to Crete this evening at 5:00, so I will leave my bag in the hotel all day as I explore more of Athens.   Because it’s so difficult to squeeze in all the new stuff, I take everything out and reorganize.  I decide then and there that I will go back to Ermou Street on my way to the Ancient Agora and return some of the stuff, if I can.  Of course I cannot read the receipts to find if the things are returnable, but I figure it’s on my way, so I’ll try. 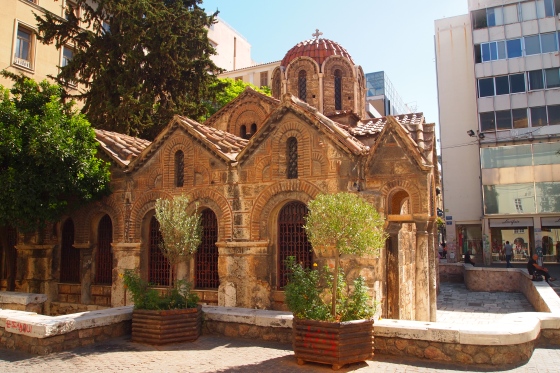 Today I take the metro for the first time, so I can prepare myself for taking it later this afternoon to the airport.  The Athens metro is nice and clean; I’ll tell you more about it in a later post.  It’s simple to negotiate though, so I easily make my way from the Acropolis station to Syntagma Square, only one stop.  Syntagma is where I should switch lines to go directly to the airport later this afternoon. 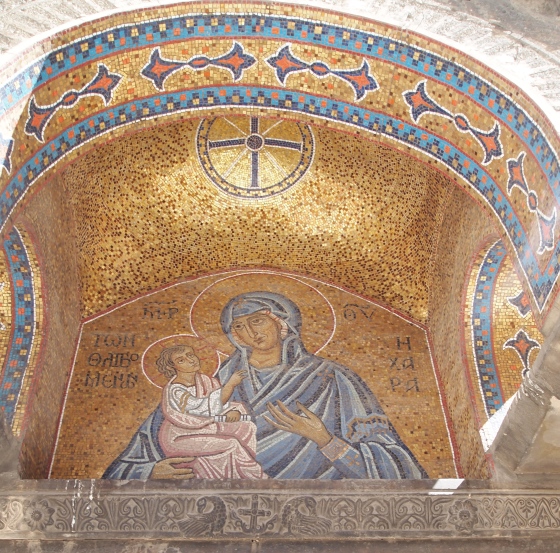 mosaic in Church of Kapnikarea

I stroll down Ermou Street wondering why there is hardly anyone about.  Though it is after 10 a.m., it’s practically deserted.  I notice quickly that all the shops are closed.  And then it dawns on me that today is Sunday.  How many of us lose track of the days while we are traveling?  I am totally messed up on my days, as every day seems like Sunday to me!!

Finally, I come across one open shop and I ask if all the other stores are closed today. The shopkeeper says yes, it’s Sunday, all shops are closed.  Except hers, of course.  Bummer.  Now I can’t return the stuff I bought and I will be stuck hauling it all around Greece with me for nearly 2 weeks. 😦

Oh well, what can I do?  I continue on down the street until I come to a tiny church in the middle of a square.  It looks like someone plopped it down in the middle of the modern shopping street, but I know it was here long before the shopping street appeared.  This 11th century Greek Orthodox Church of Kapnikarea is beautiful, but so out-of-place here!  I stop in for a brief visit.  This church was built around 1050 over a pagan temple originally built for the worship of a goddess, possibly Athena or Demeter. 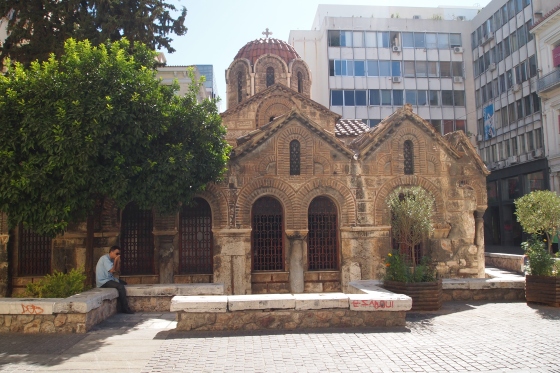 I continue down the road until I come to Monastiraki Square, bustling with its Sunday Flea Market.  There has been a church and monastery on this site since at least the 10th century, with the current church being built in 1678.  The monastery once owned many of the surrounding buildings, which were later destroyed, but the area’s name Monastiraki means “little monastery.” 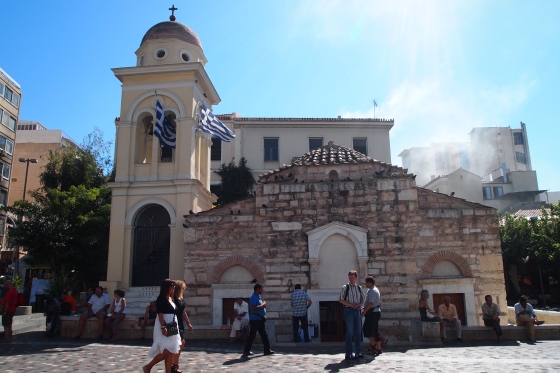 part of the old monastery at Monastiraki Square 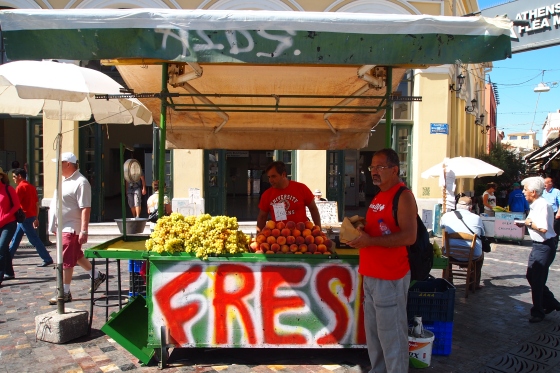 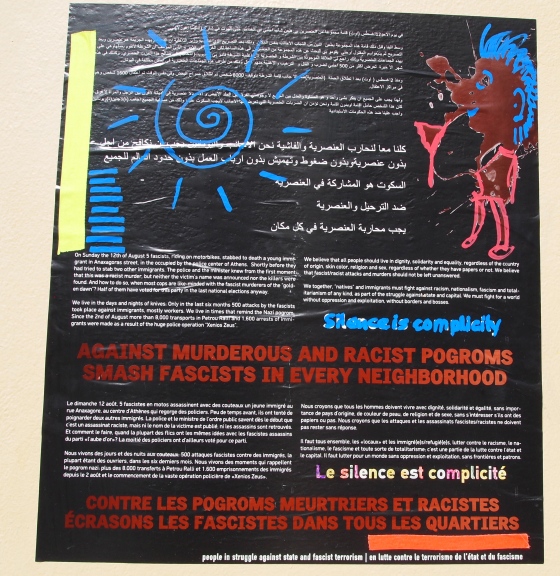 signs protesting racism in the square 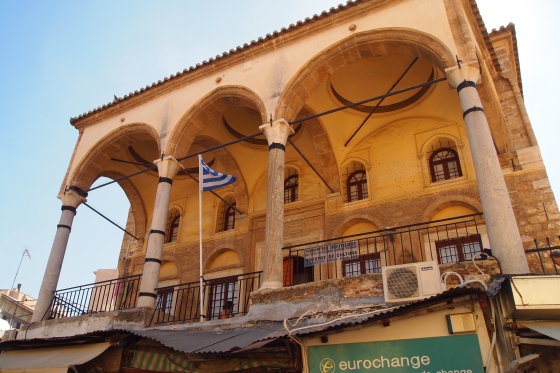 the Museum of Greek Folk Art at Monastiraki Square

Finally, I come upon the entrance to the Ancient Agora, which was once the heart of ancient Athens, first developed in the 6th century BC.  The Persians destroyed it in 480 BC, but a new Agora was built to replace it right away.  It flourished by Pericles’ time and did so until AD 267, when the Herulians, a Gothic tribe from Scandinavia, finally destroyed it.  The Agora in its day was the center of commercial, political, administrative and social activity.  Socrates expounded on his philosophy here  and St. Paul converted people to Christianity here in AD 49, according to Lonely Planet Greece. 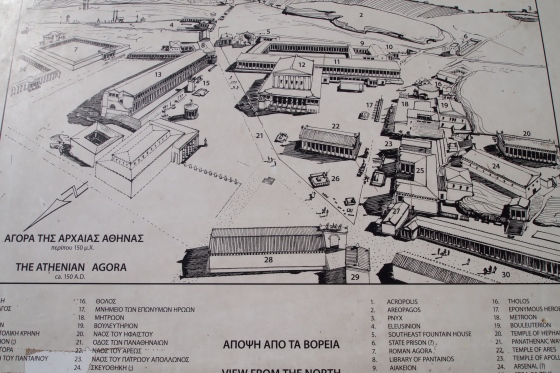 the map of the Ancient Agora 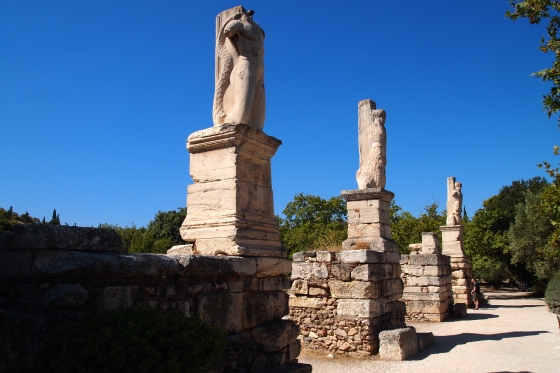 remains of the Altar of the Twelve Gods? 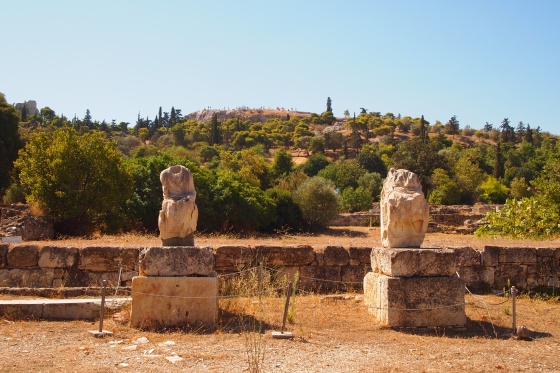 and the Temple of Ares??

Up on a hill in front of me is a very nice temple, the Temple of Hephaestus, the best-preserved Doric temple in Greece.  Dedicated to Hephaestus, patron god of metal working and craftsmanship, it was surrounded in its day by foundries and metalwork shops. 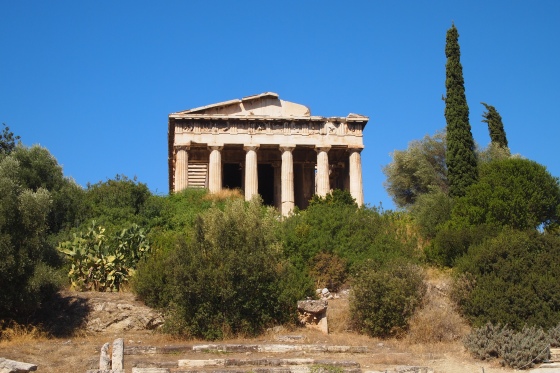 The Temple of Hephaestus

One of the architects for the Parthenon, Iktinos, built this in 449 BC and it remains standing today largely as built.  It has 34 columns and a frieze on the eastern side showing nine of the twelve Labors of Heracles.  From the 7th century until 1834, it served as the Greek Orthodox church of St. George Akamates. 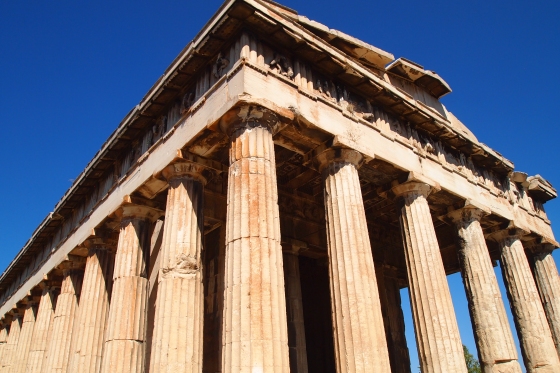 In 1834, the first King of Greece, Otto I, was officially welcomed at this church. Otto ordered the building to be used as a museum, in which capacity it remained until 1934, when it reverted to its status of an ancient monument and  archaeological research was allowed. 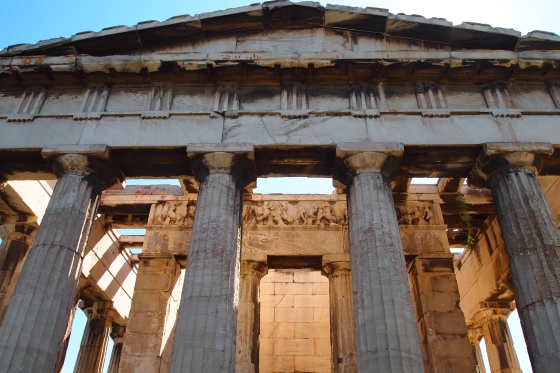 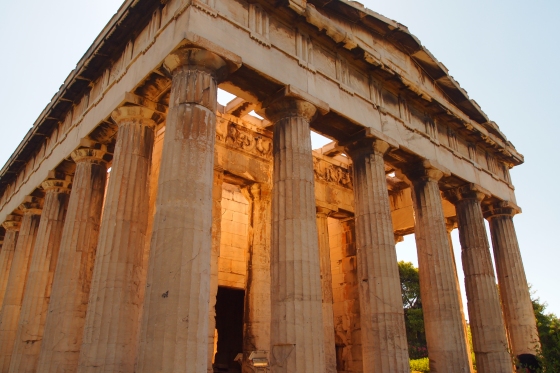 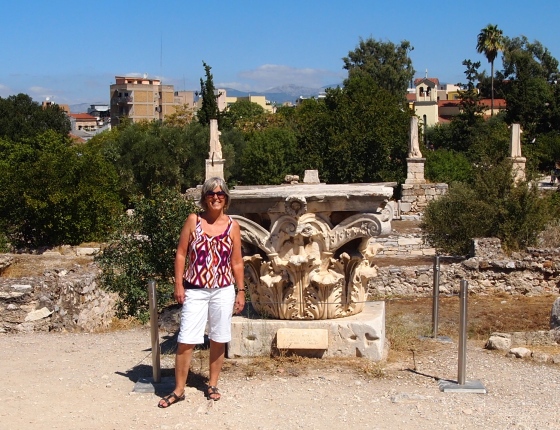 me at the Ancient Agora

I run into a solitary guy and ask him if he would like me to take his picture in return for him taking mine.  He says he is Russian but has been living in California for seven years.  We take pictures of each other and I comment that it’s always difficult when traveling alone to get pictures of oneself.  He says, “I don’t mind at all.  You’re cute, so it’s no problem!”  Funny.

At the south end of the Agora, I come upon the Church of the Holy Apostles.  This is particularly significant as the only monument in the Agora, other than the Temple of Hephaestus, to survive intact since its foundation, and for its architecture: it was the first significant church of the middle Byzantine period in Athens, and marks the beginning of the so-called “Athenian type”, successfully combining the simple four-pier with the cross-in-square forms, according to Wikipedia. 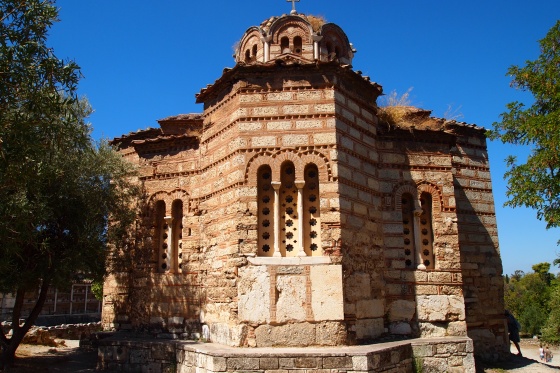 Church of the Holy Apostles

The Agora Museum has a model of the Agora as well as artifacts assembled from the site.  This was the world’s first shopping arcade, built from 159-138 BC by King Attalos II of Pergamum.  It is two stories high and in its day had two aisles with expensive shops.   It was reconstructed from 1953-1956 by the American School of Archeology, but its facade was left in natural Pentelic marble (originally painted red and blue). 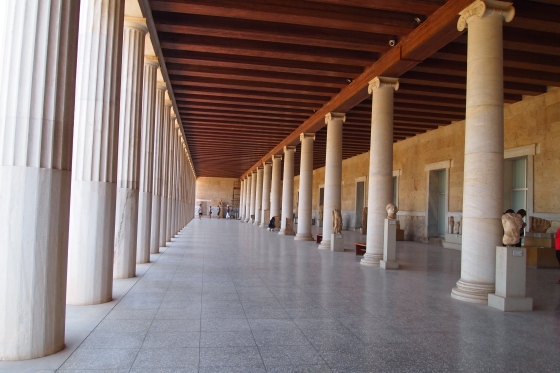 Under cover at the Agora Museum

After my long and hot walk through the Agora, I am ready to sit and have a light lunch and something to drink.  I find an inviting little cafe where I order orange Fanta, water, and some delicious lemon chicken soup.   Yum! 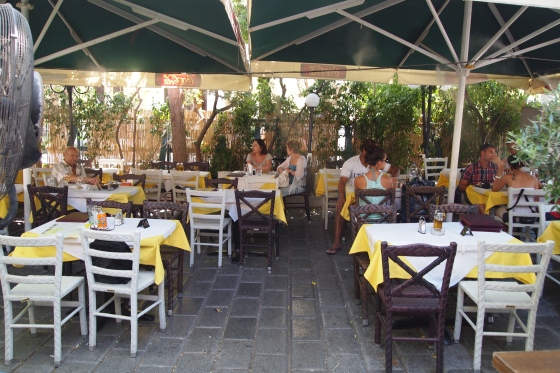 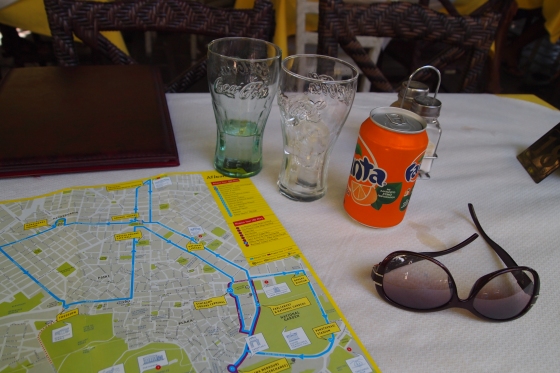 studying the map for further adventures 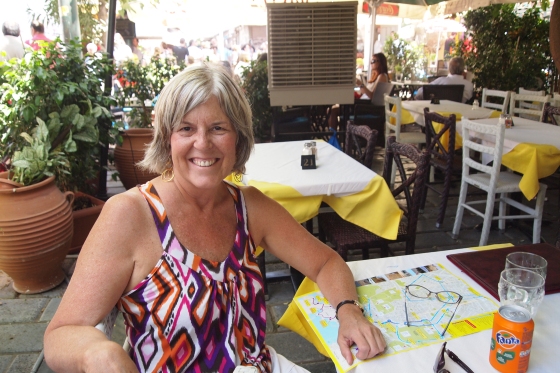 having lunch after exploring the Agora 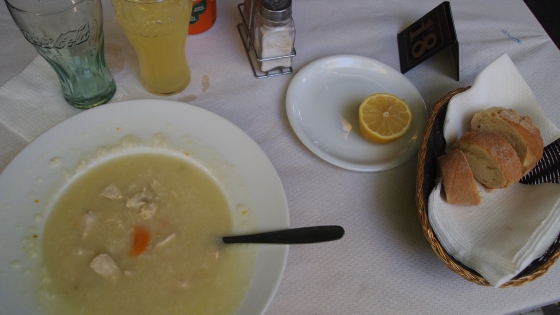 After lunch, I head back toward the Monastiraki Flea Market on my way to Keramikos, the city’s cemetery from the 12th century BC until Roman times.  There is so much bustle on the streets around Monastiraki Square that it’s a photographer’s dream.  Some shots of the vibrant streets of the Sunday Flea Market follow. 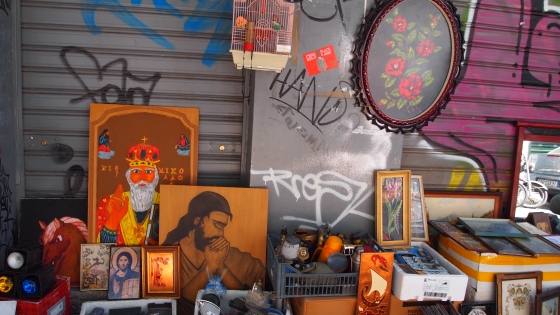 Stuff for sale at the Flea Market 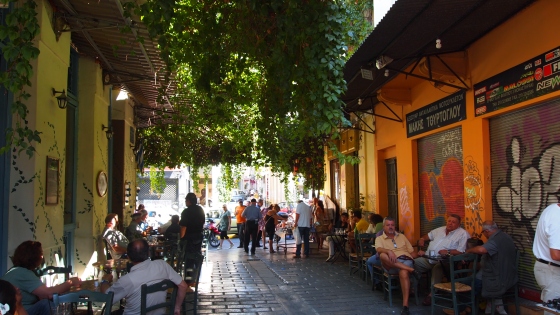 inviting streets in Monastiraki near the Agora

a busy street corner in the Monastiraki area

I only have a little time left before I must head to the airport, so I walk down the street to Keramikos to explore one of Athens’ old cemeteries.